"Call it what it is, a hate crime. Stop anti-Asian violence. Stop China bashing," say activists in Providence

Marie Franco wants answers about her son's death at the ACI

The Rhode Island Coalition Against Gun Violence (RICAGV) Youth Committee held a youth power rally to address the administrative response of schools who prevented students from participating in the state-wide school walkouts in March. Many students felt their rights to organize and speak out were not heard and they felt unsupported in their organizing efforts. Many of these students reached out to the American Civil Liberties Union (ACLU) for help, wondering if their rights to protest in school had been violated, and the Rhode Island ACLU found they may have been, say organizers.

Over 100 youth activists representing Young Voices Rhode Island, Providence Student Union (PSU), Breakthrough PVD and One Gun Gone gathered on the State House lawn Tuesday afternoon to unveil a new youth/student power handbook with information on how to form political clubs in public schools and information on students’ right to protest in schools and in other spaces.

The rally was solidly grounded in gun violence prevention, taking on both legislative initiatives and intersectional discussions about urban violence.

Below is video of all the speakers at the rally:

“This winter, after we witnessed yet another tragic school shooting and watch many of our politicians do nothing but offer thoughts and prayers, students walked out of school all across the nation to tell these people to wake up and to value human life over NRA money,” said Grace Reed, who emceed the event. “Right here in Rhode Island many young activists planned walkouts at their schools, but in many districts, school administrations stepped in to silence student voices and sometimes to physically stop these walkouts from happening.”

“Gun violence has always frustrated me because it’s such a big issue yet people in power don’t want to change it,” said Juan Doriano, youth leader and boardmember of Young Voices Rhode Island. “Gun violence, whether on a large scale or small scale is such a horrible thing that no one should go through.”

“Sometimes when people get shot it is close to where I live. All I am saying is I have seen and heard enough to make be here and give a speech about how I am traumatized because of gun violence even though I am just 14,” said Angelina Williams, a student leader with Providence Student Union. “I am here to tell you that just because I am kid, doesn’t mean I haven’t experienced traumatizing moments from gun violence. I live in Chad Brown and if you know Chad Brown, you know people wave guns like it is their flag.”

“A group of Rhode Island youth, of our own accord, have banded together to stage this day of education, change and political action,” said Tollgate High School student Tara Monastesse, who wrote a piece for the Warwick Beacon about the rally. “We have taken time out of our summer break to make change in our community as we feel it is our responsibility as citizens.”

“When we see instances of preventable gun violence in the many distinct schools across our state and country, we have an obligation to speak out about our experiences, as one,” said student activist Sophie Carter. “When the opinions and objectives of teachers, administrators and public officials differ from those of the civically engaged youth it is our responsibility to peacefully organize as a unified yet diverse body.”

“My journey, like many privileged people, began when my bubble was popped on June 13, 2016, with the Pulse massacre,” said community organizer Nika Lomazzo. “I woke up that morning to find out… that 49 queer bodies had been brutalized and murdered at a night club, the night before, in Orlando, Florida.”

Grace Reed wraps up with some closing words. 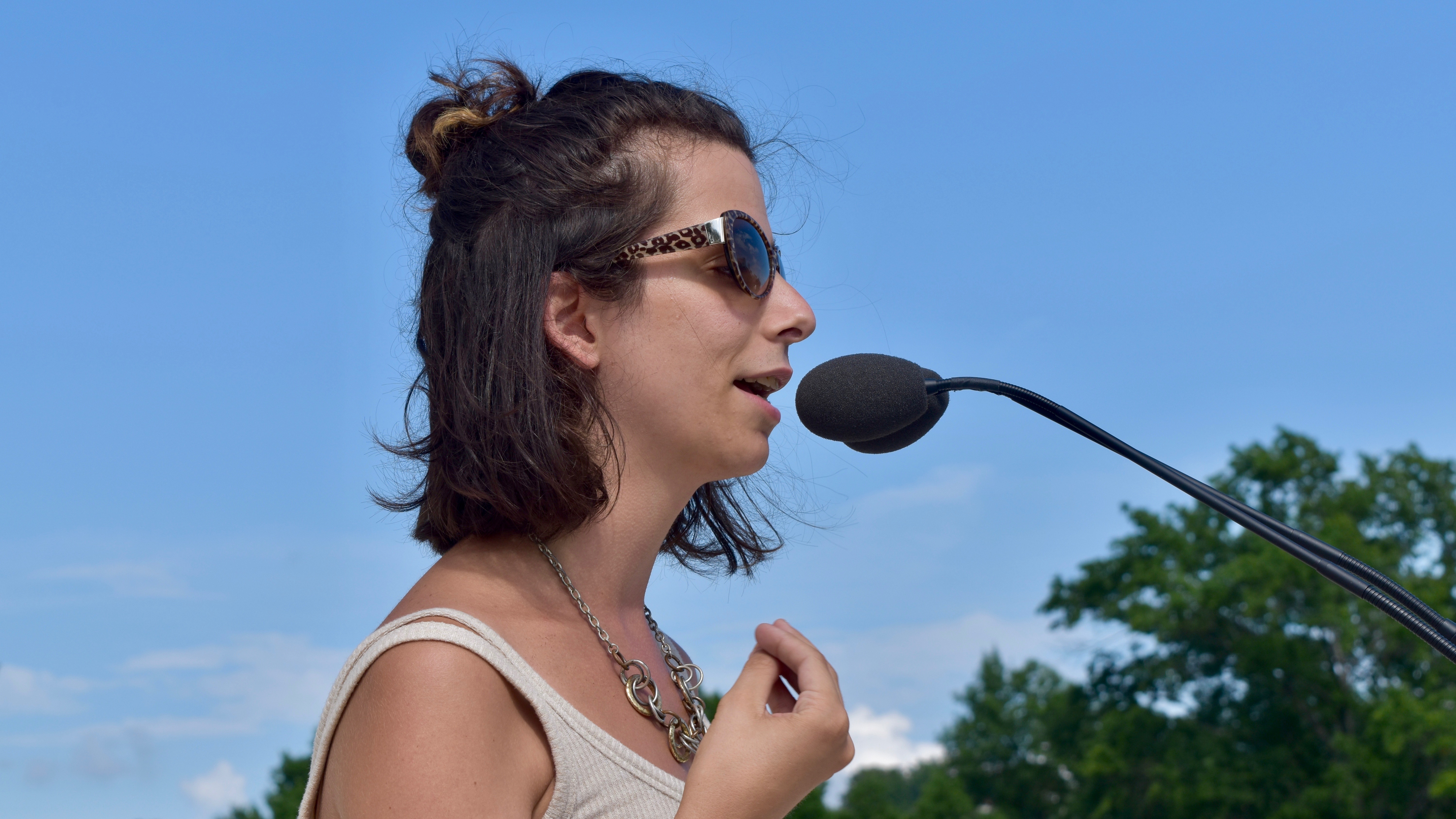 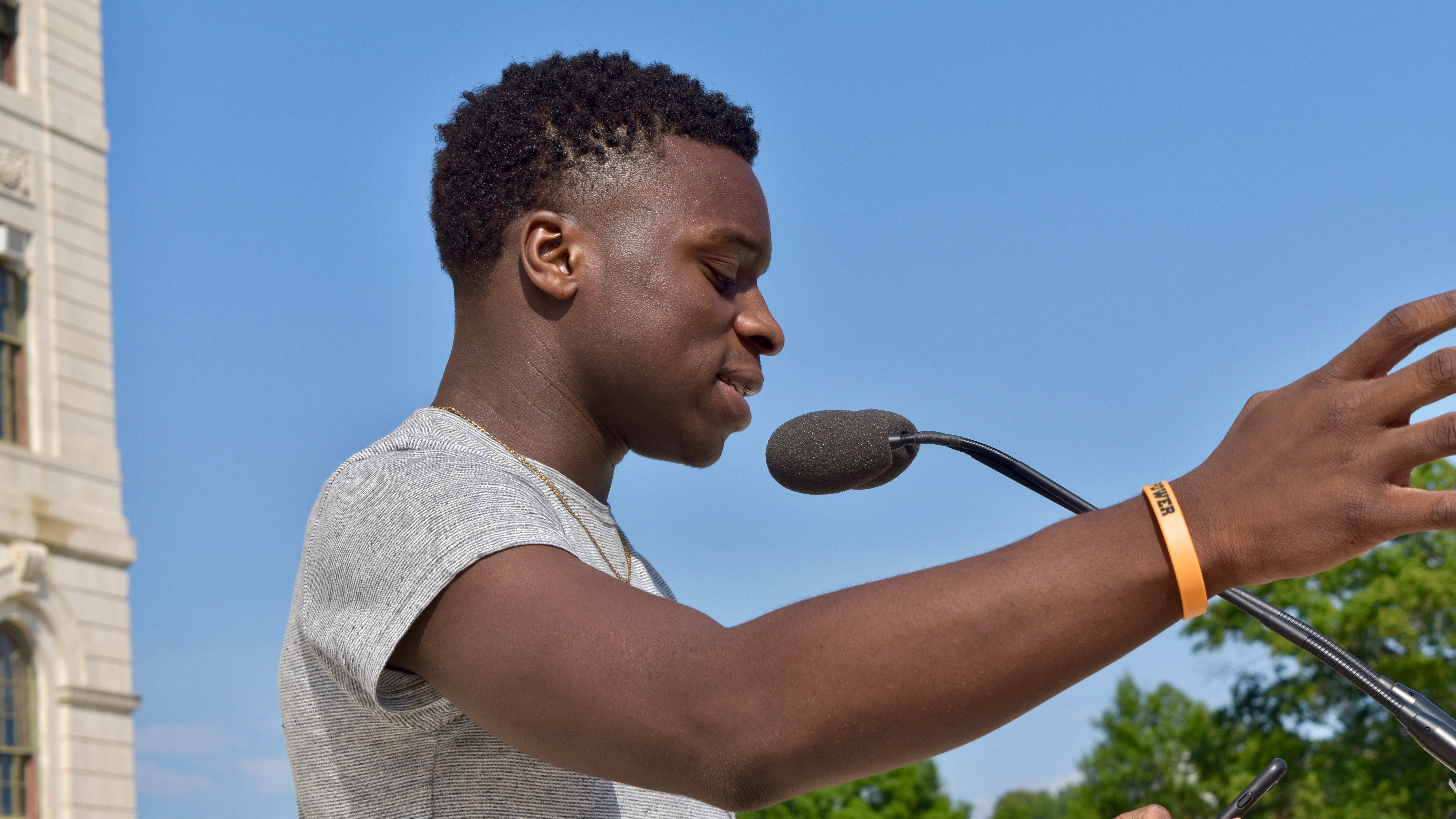 Substance use and overdose prevention PAC kicks off