“Apathy is a Worker’s Disaster”: Teamsters 251 on the Johnson Brothers Strike, How you can help, and Why it matters

“Apathy is a worker’s disaster,” said Teamster Matt Maini. “What we need is for people to understand that workers around the world are the same, and their struggle is your struggle.”

Workers are seeing the benefits of unionizing across the country, from the big cities in California, to the small towns in the country’s smallest state.

Three years ago, Rhode Island Teamsters 251 made a name for themselves by organizing local DHL workers. Under their guidance, DHL employees voted to unionize, and when the corporation started to push back against the prospect of meaningful collective bargaining, the teamsters, along with the workers, initiated a ten week strike until they won. As Teamsters member Matt Maini told us in an interview, DHL was a recent “ success story” for Teamsters 251, bolstering their credibility.

The 251’s actions don’t start and stop just in Rhode Island. Matt said that they see themselves as part of a broader world-wide coalition that wants workers to stand for a cause, which to him entails increased collective bargaining and unionization across the board, from healthcare to construction workers and service workers. But unlike their fight against DHL, their new campaign reaches consumers a little more directly.

Teamsters local 251 is currently involved in an action at Johnson Brothers Distribution in North Kingstown, the state’s exclusive distributor of Gallo Wine products. Gallo Wines’ inventory includes familiar favorites like Carlo Rossi and Ecco Domani wines, and High Noon, a popular line of hard seltzers. That’s a lot for edgy leftists to forego, but don’t fret: in Rhode Island, the teamsters represent almost 99% of the beverage industry, so the alternatives are almost endless. If any leftist comrades reading are worried about giving up their High Noon, Matt reassured me that you can turn to White Claw, Truly, and Budlight Seltzer, which are all carried and distributed by teamsters. Even if you don’t like the alternatives, show some solidarity and avoid Gallo for now. The struggle for worker’s rights demands sacrifice. All of us, at some point, have needed someone in our corner and as Matt stated plainly, “apathy is a worker’s disaster. What we need is for people to understand that workers around the world are the same, and their struggle is your struggle.”

To be frank, before talking to Matt, we were aware of the strike but didn’t fully understand all that was involved, or how important it was. Tensions arose when, in September 2020, workers voted to unionize, and Johnson Brothers of Rhode Island quickly made clear their unwillingness to budge on wages, healthcare, and pensions. Instead, in an effort to look good, they employed a common tactic, what Matt calls “surface bargaining,” that is, just meeting to meet, in order to wait for a vote to decertify the vote to unionize. Without action, the vote to unionize is brought back to the workers, and at that point the company can use every dirty trick in the book to influence employees to vote against unionizing. Matt says this is why voting for the PRO-Act is key nationwide, not just in Rhode Island. “This corporation has made the decision that they’re going to bargain in bad faith to avoid working with a union, and that’s wrong,” he added. The PRO-Act seeks to protect unions and workers from employers who use dirty tactics to bust or disempower unions. It is a nationwide effort to level the playing field between laborer and capitalist.

Back in North Kingstown, Johnson Brothers employees are making a paltry $15 an hour, with a healthcare deductible of $20,300. That means employees with pre-existing conditions can either spend enormous amounts on healthcare coverage, or turn to state coverage. When they turn to state coverage, Johnson Brothers gets to pocket the money that they would otherwise have spent on providing healthcare. Matt calls this the “Walmart template” because corporate responses are so predictable that union organizers like Matt can see them coming a mile away. For a company that made over six billion dollars this past year, during a Pandemic, that is simply unacceptable for Teamsters 251. What’s worse is that when the strike began, Johnson Brothers went ahead and terminated healthcare to workers that did receive it through them – a total mask-off moment of corporate spite.

The Teamsters filed an Unfair Labor Practices charge to the National Labor Relations Board (NLRB), believing that Johnson Brothers violated the NLRA Act. Matt says the charges range from everything like bargaining in bad faith, to “discrimination, wage theft, and around 26 other filings.” If the NLRB finds a wrong doing, they can issue a 10-J injunction complaint to stop the corporation from issuing a decertification vote, basically forcing them to come back to the negotiating table.

The union-aspiring workers and Teamsters walked out on May 26th and have been striking for about 12 weeks now. Since then, they’ve been urging Rhode Islanders to avoid Gallo products and stores like Haxton’s Liquors and Douglas Wine and Spirits, stores that have been accepting deliveries from SCAB drivers. In this case, SCABs are strikebreaking delivery drivers who cross the picket line, hired by the corporation to bypass striking workers.

Johnson Brothers has repeatedly tried to scare workers into crossing the picket line. As Matt said, this is normal corporate behavior, and one that the Teamsters have grown to expect and learn to combat. Media coverage has been mostly DIY up to this point, and Matt understands that the mainstream media typically avoids covering labor rights and issues (probably for fear of offending their corporate sponsors). For many national news agencies, even the left-leaning ones, blasting a labor issue from little ol’ North Kingstown, Rhode Island just doesn’t elicit enough reader engagement. That desperately needs to change, because these “little” battles matter for the broader mosaic. The more victories we have at every level, on any scale, the stronger the working class becomes. 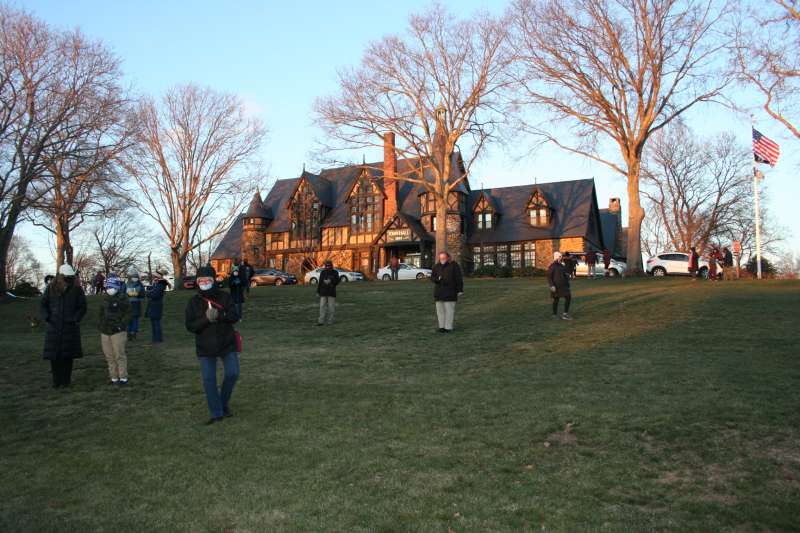