AG Neronha: Proposed LPG facility expansion in Port of Providence should be subject to robust regulatory review by EFSB 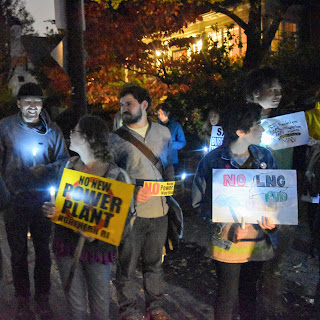 The rain mostly stopped and the weather cooperated so that about 30 people could gather for a vigil outside Governor Gina Raimondo’s private residence on the East Side of Providence Thursday evening. The vigil was organized by No LNG in PVD, Burrillville Against Spectra Expansion (BASE) and The FANG Collective. At issue is Governor Raimondo’s lack of action against Invenergy’s $1 billion fracked gas and diesel oil burning power plant aimed at the forests of Burrillville and her similar lack of action on National Grid’s LNG liquefaction facility planned for Field’s Point in the Port of Providence, next to a working class and environmentally compromised neighborhood of color.

Though Raimondo has seemingly moved away from supporting the power plant aimed at Burrillville, telling the ProJo that her support for the proposed power plant “was a very long time ago,” her official position is still one of neutrality. She has repeatedly said that the licensing process of the Energy Facilities Siting Board must play out without political interference from her office.

Her position on National Grid’s liquefaction facility is unknown. Since the approval process in that case is under FERC (Federal Energy Regulatory Commission) the Governor has limited power to affect the outcome. Still, strong statements of opposition to such infrastructure could certainly have  influence, and the project does need two local state level permits, which if denied would stop the project.

[Note: Shortly after I wrote this I received an email telling me that Governor Raimondo does indeed have a position on the proposed liquefaction facility at Fields Point. From the Brown Daily Herald:

“If built, this project offers the potential to diversify sources of gas supply (in the state),” wrote Brenna McCabe, public information officer for Gov. Gina Raimondo in an email to The Herald. She added that an on-site liquefaction facility would “create an economic hedge against more price volatile (and foreign-sourced) LNG supplies.”] 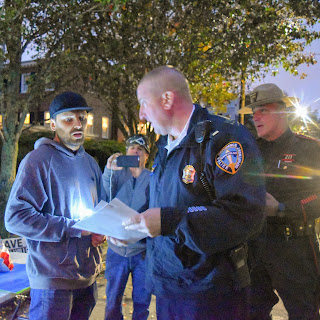 The vigil outside Raimondo’s home lasted 90 minutes. People held signs and chatted. A Providence Police officer told organizers early on that the City of Providence has an ordinance against picketing private residences. However, the Providence Police and the Rhode Island State Police allowed the vigil to continue for the full 90 minutes, which is a win for freedom of assembly.

Toward the end of the vigil Andy Moffit, Rhode Island’s First Gentleman, came outside to walk his dog and he engaged in a brief chat with Kathy Martley of BASE about the concerns.

Governor Raimondo “has to respect the people of Rhode Island,” said Kathy Martley of BASE, who has been fighting the build up of natural gas infrastructure in Burrillville since well before the announcement of the power plant. “That’s what she stands for. That’s what she’s there for. She works for us.”

No LNG in PVD is currently running a crowdfunding campaign to pay the legal fees associated with their efforts. Every little bit helps. Below, Kate Schapira talks about future steps in the battle. Previous coverage of No LNG in PVD:

Here’s the press release from the groups:

Power Plant and LNG Opponents Demonstrate Outside of Governor Raimondo’s House
On Thursday evening thirty people held a vigil outside of Governor Raimondo’s house in Providence in a continuation of protests against the power plant that Invenergy has proposed for Burrillville and the LNG facility that National Grid has proposed for Providence. The event was organized by Burrillville BASE, the No LNG in PVD Coalition and the FANG Collective.
“The regulatory process that could approve these fossil fuel projects is broken. The Governor knows that these projects would harm people, so now is the time for her to protect our environment and the health of our children by opposing both the LNG facility and the power plant”, Kathy Martley or Burrillville BASE.
Demonstrators occupied the sidewalk and part of the road across the the street from the Governor’s house, holding signs and battery powered candles. Coffee and hot apple cider was also handed out. Organizers for the event expressed that with key State regulatory decisions coming up for both the LNG facility and the power plant, time is running out for the Governor to meaningfully oppose the projects.
The Coastal Resource Management Council is hosting hearings next month on the LNG facility, and the Department of Environmental Management is deliberating a key soil permit that National Grid would need to move forward. Meanwhile the Energy Facility Siting Board could begin the final hearings on the proposed Burrillville power plant in December.
“We need the Governor to do the right thing and resist these local fossil fuel projects before it’s too late. If these projects are approved and built under her watch, I’m not sure that she would ever be able to recover politically”, Nick Katkevich of the FANG Collective.
The demonstration follows a series of other actions that have targeted the Governor over the projects. This includes a sit-in at the State House where one person was arrested last Spring and a march from Providence to Burrillville that coincided with the Governor’s much anticipated visit there last Summer. Last week the No LNG in PVD Coalition delivered a letter to the Governor co-signed by a number of elected officials urging her to help fight National Grid’s proposed $180 million facility. Providence Mayor Jorge Elorza followed suit with a similar letter.
Also on Thursday night, Cranston Mayor Allan Fung, one of Governor Raimondo’s top rivals in the gubernatorial race, announced his opposition to the power plant.
“We are asking Governor Gina Raimondo to wake up and oppose these toxic fossil fuel projects”, Arely Diaz of the FANG Collective. 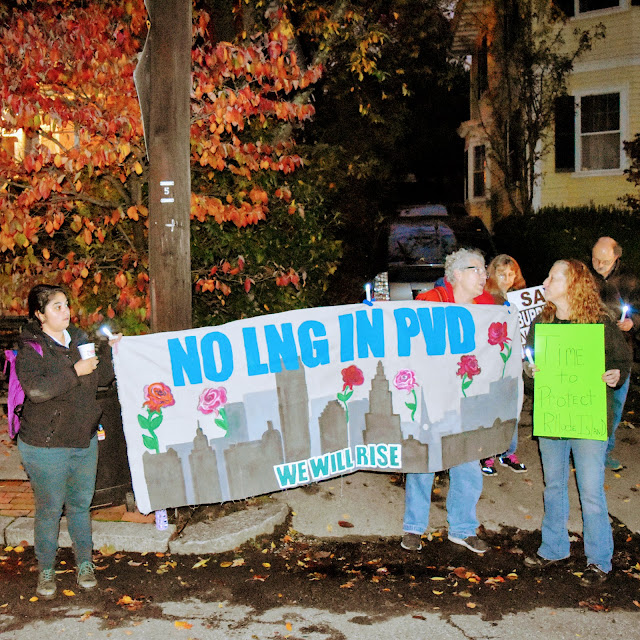 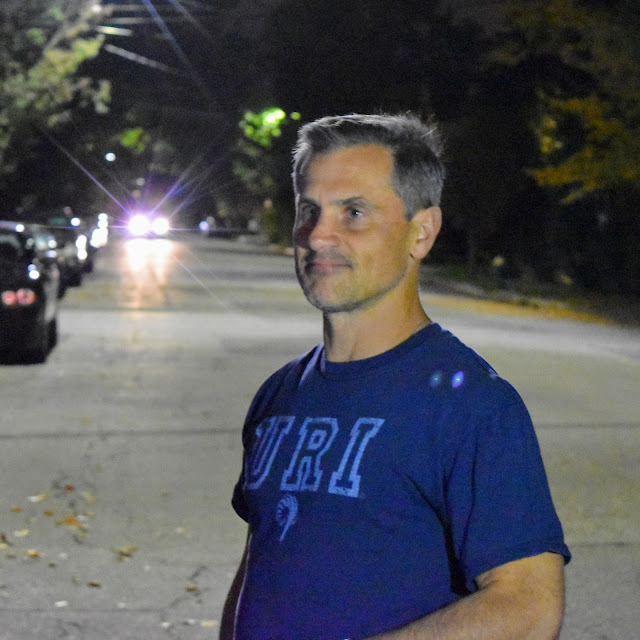 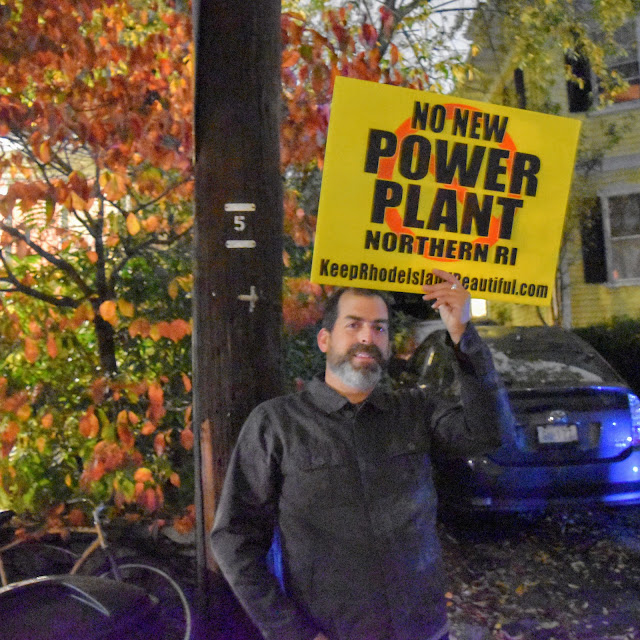 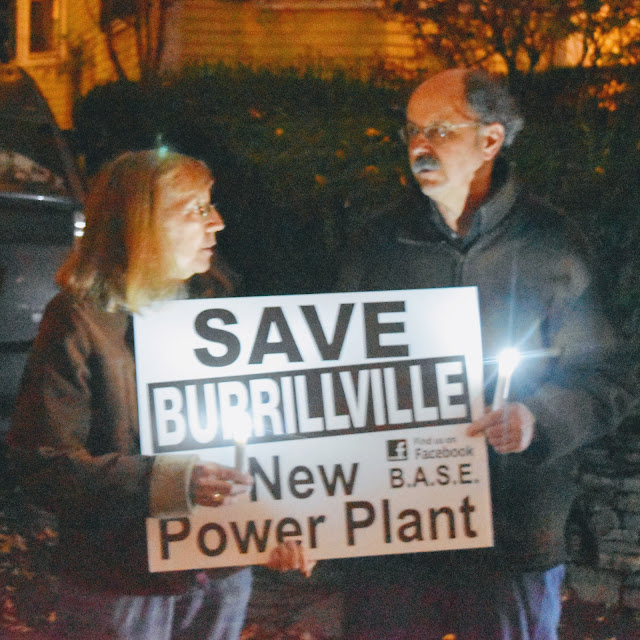 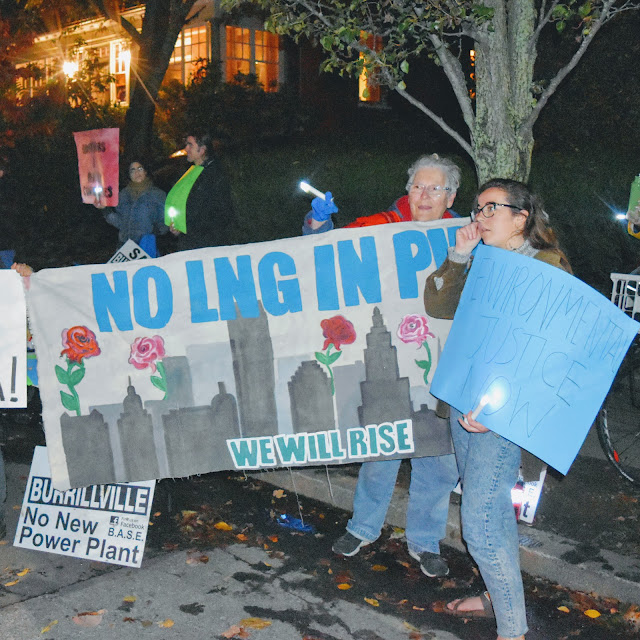 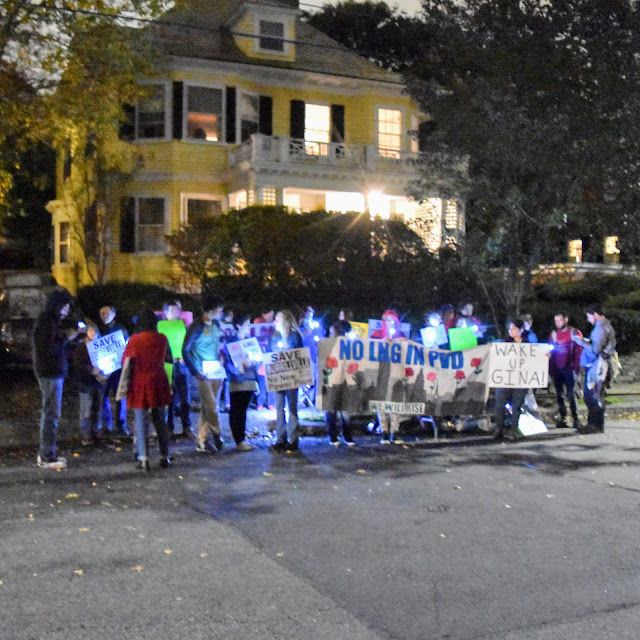 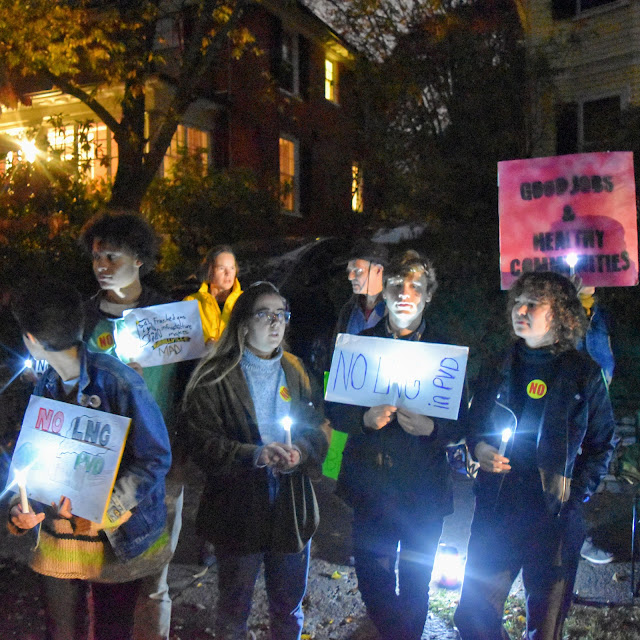 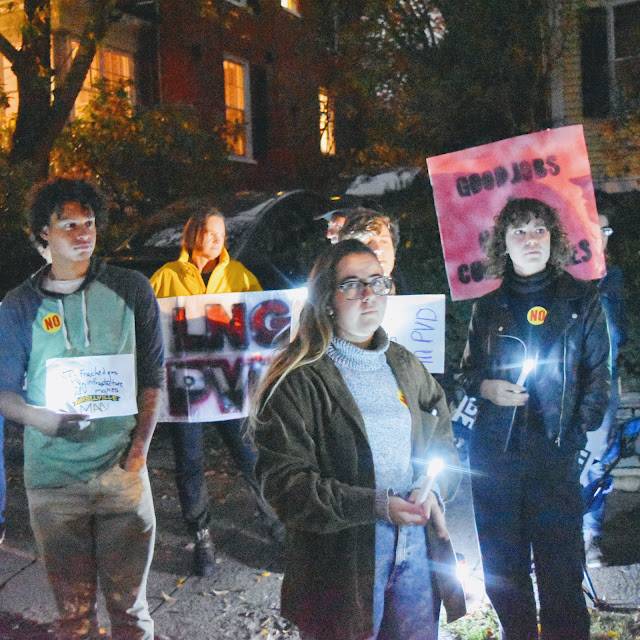 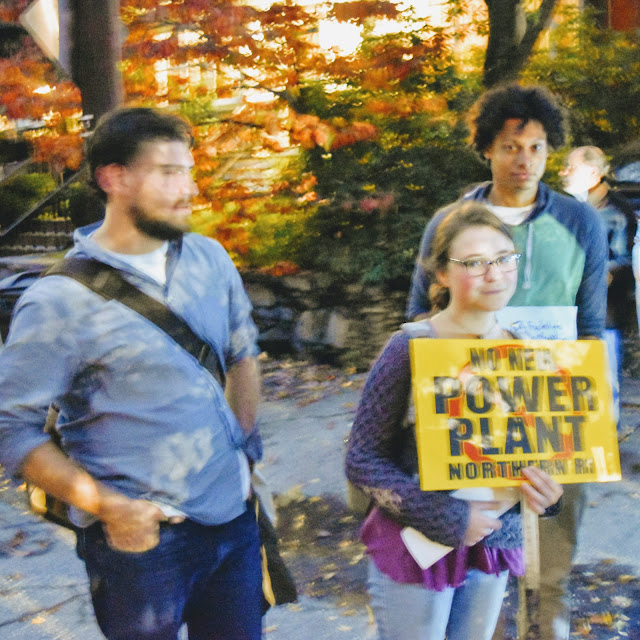 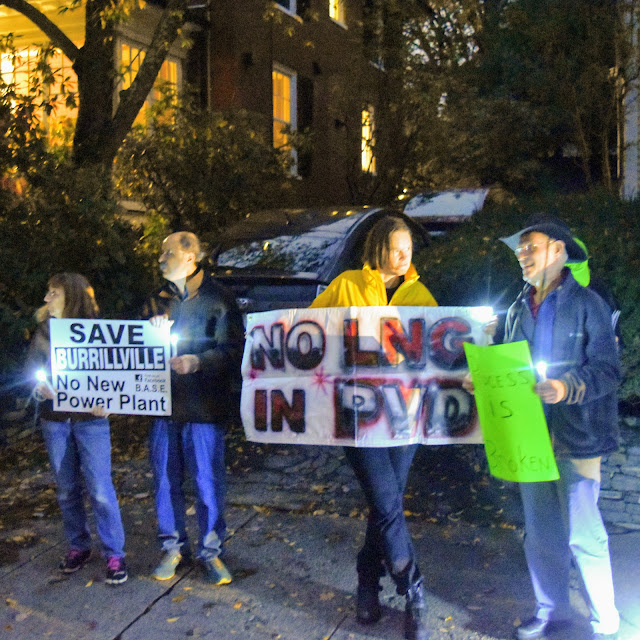 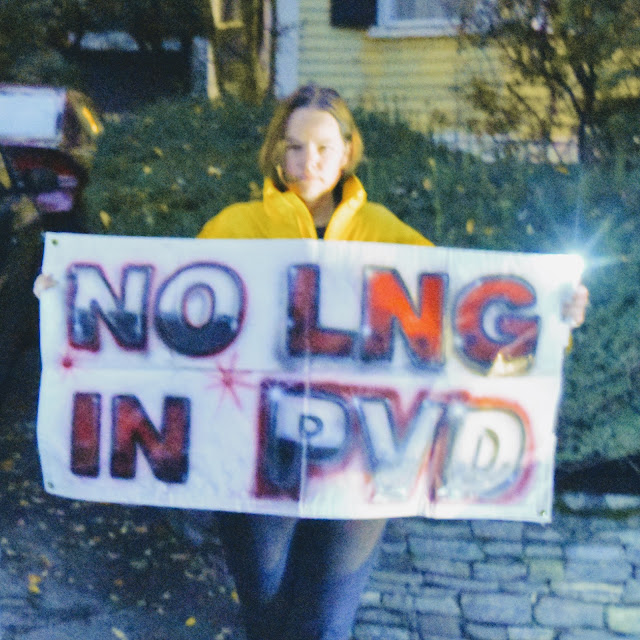 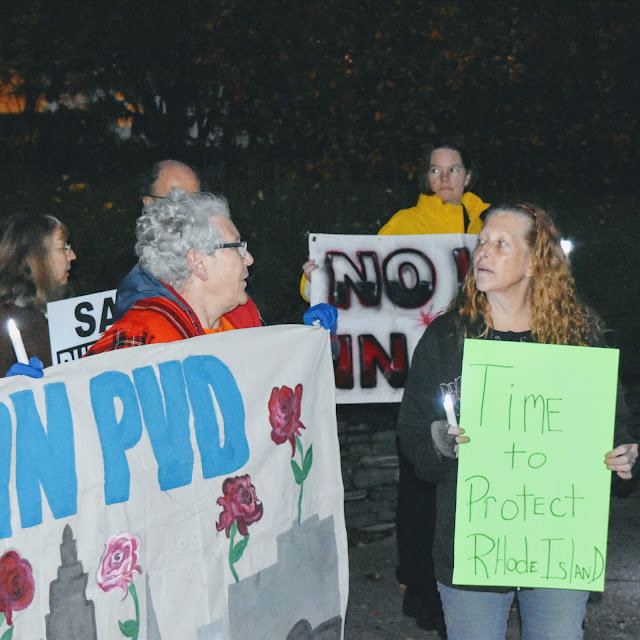 From Providence to Palestine: A Rally for Sheikh Jarrah

Around 1000 people gathered at the RISD Beach in Providence (210 Benefit Street) calling for an end to the violence....

"During today's action, Senator Reed told us that he supports a ceasefire on "both sides," but refused to acknowledge the...

“In 2020 Rhode Islanders were given choices to cast their ballots and they responded in record numbers,” said Senator Dawn...

"These real connections between Palestine and Providence are the reason why we’re joining with other Rhode Islanders to put together...