Seth Magaziner abandons race for governorship to run for Congress

“Every day, Republicans in Washington demonstrate they care more about doing Donald Trump’s bidding than they do about defending the constitution or delivering results for working families. It’s critical Rhode Island Democrats field a proven general election candidate who can prevent the Republicans from taking back this seat in Congress,” said Magaziner. 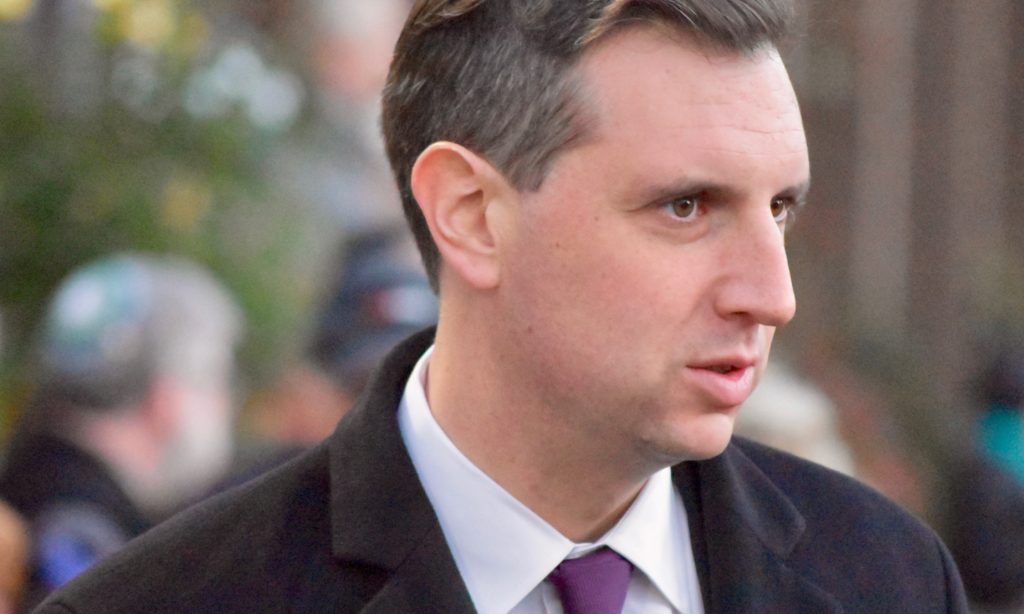 Published on January 26, 2022
By Steve Ahlquist

Rhode Islander General Treasurer Seth Magaziner today abandoned his campaign for Governor, opting instead to formally announced his candidacy for Rhode Island’s 2nd Congressional district. James Langevin, who currently occupies that seat, has announced he will not be seeking re-election, leaving an open seat.

“The fight to preserve our democracy is the most sacred obligation of this generation and this is why I’ve decided to seek to represent the people of Rhode Island’s second congressional district in the United States House of Representatives,” said Magaziner in statement. “National Republicans like Donald Trump and Kevin McCarthy seek to divide America, undermine democracy, and appeal to the most chaotic, hateful and dangerous elements of their party. Rhode Island must do our part to ensure that they do not succeed.”

At his press announcement held at the William Hall Library in Cranston, Magaziner mostly fielded questions about the reasons for his decision, which seems mostly based on a fear that Republicans may take a the seat in an election cycle when the Republican Party is said to be on an upswing across the nation.

“Every day, Republicans in Washington demonstrate they care more about doing Donald Trump’s bidding than they do about defending the constitution or delivering results for working families. It’s critical Rhode Island Democrats field a proven general election candidate who can prevent the Republicans from taking back this seat in Congress,” said Magaziner.

On the issues, Magaziner said he wants to concentrate on education. He also said that one of his first bills will about giving frontline health care workers more money. More substantive policy initiatives will be revealed over the course of the next few weeks.

Democrats Omar Bah and Ed Pacheco have already announced their intention to run or the open seat. UpriseRI will be publishing interviews with both these candidates this week.

Seth Magaziner has served Rhode Island since 2015 as General Treasurer where he has prioritized improving public education and creating clean energy jobs. As Chair of the state’s School Building Task Force, Seth launched a once-in-a-generation plan to transform Rhode Island school buildings so all students can go to schools that are safe, warm, dry, and have the facilities to prepare them for 21st-century jobs. Under Seth’s leadership, the statewide school construction initiative has created more than 22,000 jobs and helped to repair or replace over 189 schools across the state including schools like Eden Park and Garden City Elementary Schools in Cranston.

In his race for treasurer, Magaziner won the support of second congressional district voters in both 2014 and 2018.

Five newly announced progressive candidates will go head to head against some heavyweight incumbents, including the House Majority Leader and others in General Assembly leadership positions....

Rhode Island Chapter of the Communist Party of the United States

“Our goal is political unity in the face of the growing threat to our communities and state, and we invite all left-aligned individuals and groups to join our future reading...

Brett Smiley officially kicks off his campaign for Mayor of Providence

“Eight years ago, I made the hardest decision of my professional life and stepped aside to help prevent our city from taking a huge step backward and reelecting Buddy Cianci....