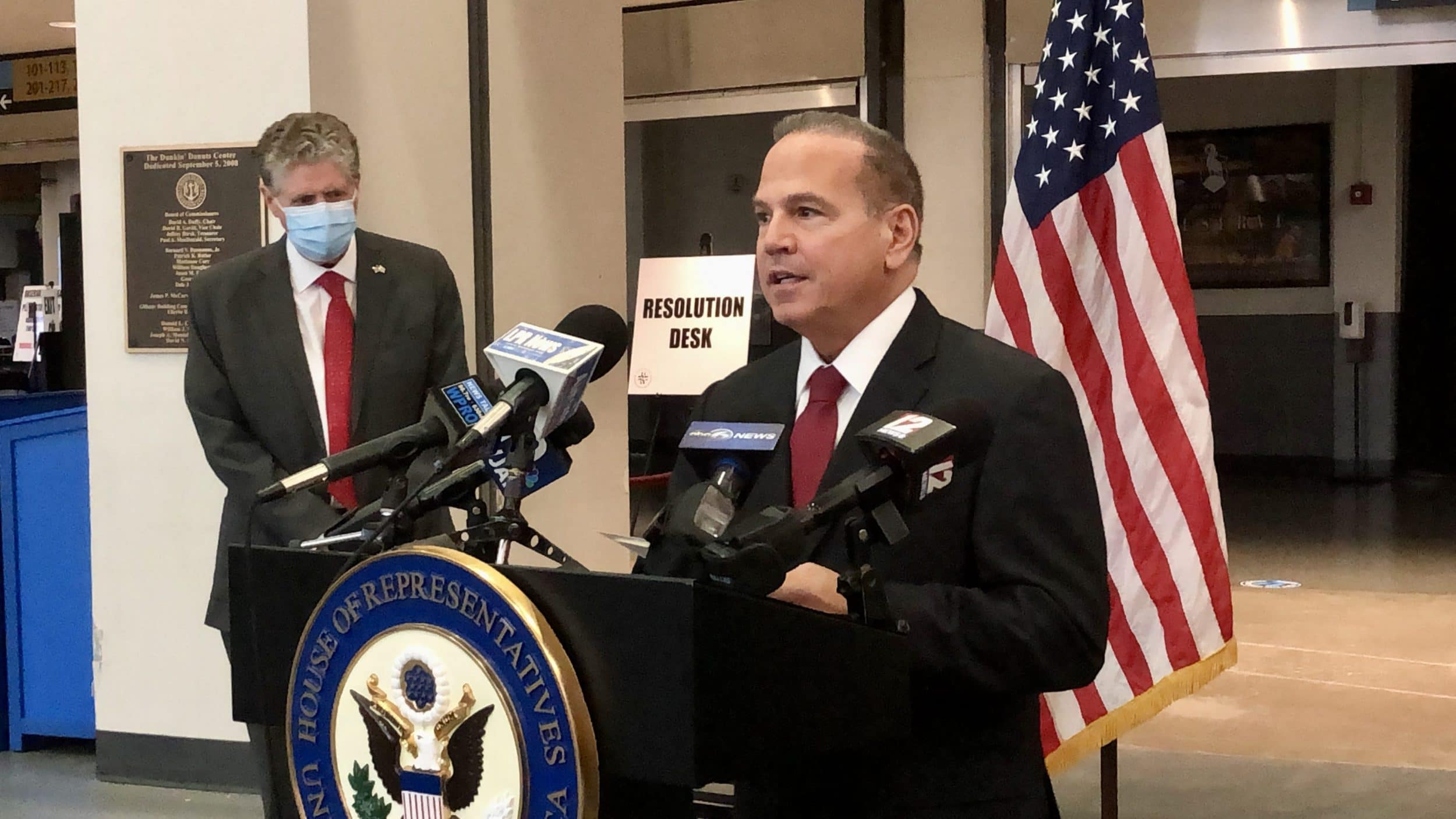 Federal, state, and local leaders held a press conference at the Dunkin’ Donuts Arena today and outlined ways Rhode Island is slated to benefit from the COVID relief package that the United States House passed early Saturday morning. The legislation includes $1,400 survival checks to put money in the pockets of working people, expanded unemployment benefits, a pay raise for nearly 30 million people, and nearly $1.7b in relief for Rhode Island state and local government.

“This virus has wreaked havoc on our country and has created an economic crisis and a public health crisis for families all across America, including here in Rhode Island. More than 500,000 Americans have now died, including 2,500 Rhode Islanders. Millions have lost their jobs and small businesses have closed their doors,” said United States Representative David Cicilline (Democrat RI). “Democrats promised to deliver the relief the American people need. We are making good on that promise. It’s critical that the Senate send this bill to President Biden‘s desk as soon as possible.”

“Too many Americans are suffering due to the COVID-19 pandemic, and the ‘American Rescue Plan’ is the bold response this crisis requires to get desperately needed help to them,” said United States Representative James Langevin (Democrat RI). “In addition to the direct payments of $1,400 to more Americans including adult dependents, the more than $2b in state and local aid for Rhode Island and funding for robust testing and vaccination efforts will help save lives, keep essential services running, and help struggling families and communities recover. We are seeing progress in our fight against COVID-19, but more work remains, and this package will provide us the resources and support to turn the corner. I will continue to work diligently with my colleagues to ensure the Ocean State can overcome this emergency and come out stronger.”

“Providing direct, flexible aid to cities is the most equitable and efficient way to help Rhode Islanders and our communities who have suffered for far too long,” said Providence Mayor Jorge Elorza. “As the economic engines of our country, cities will be relied upon to lead the long-term economic recovery our nation so desperately needs, even as, with few exceptions, local governments have been largely left without direct federal assistance. The $350 billion in direct relief to state and local governments included in President Biden’s American Rescue Plan would allow cities to preserve critical public sector jobs and create a foundation for sustainable and inclusive recovery.”

President Joe Biden’s American Rescue Plan, which the House passed last Saturday, delivers $1.9t and leverages the full force of the federal government to take on this crisis. Among the direct benefits to Rhode Island are:

The bill also gives minimum wage earners their first pay raise in more than a decade – a move that would benefit more than 100,000 Rhode Islanders – more than one out of every five workers in the state. [But that provision will likely not make it past the United States Senate.]

Senate Majority Leader Chuck Schumer (Democrat NY) has said that the relief bill passed by the House is on track to reach President Joe Biden’s desk by March 14th.

Save Kennedy Plaza! say riders and advocates at protest against RIDOT/McKee plan to destroy it

Arrested for bearing speech, arms, or both?

"When they ganged up on me it was like they wanted to punish me for trying to speak up. Like...

"I couldn’t believe it the next morning when I showed up to wait for him at court and the clerk...

“City council members make decisions that affect education, the local economy, and the overall quality of life in their community....

"...we need to create a system that breaks the cycle of violence. Then we need to end what is the...

RIDOT’s written response to the complaint is superficial and flimsy and disregards the significant, disproportionate and negative impacts that RIDOT’s...