What does Rhode Island and Providence Plantations have to do with slavery? - Everything

Summoning the Future: An interview with Tiara Mack

They're not as strong as we think they are: An interview with Senator-elect Cynthia Mendes

Rhode Island Republican Party Chairman Brandon Bell used Joseph DeLorenzo’s continued occupation of his position as the 2nd Vice Chair of the Rhode Island Democratic Party to demonstrate the hypocrisy of leaders such as Speaker of the House Nicholas Mattiello and Rhode Island Democratic Party Chairman (and State Representative) Joseph McNamara (Democrat, District 19, Warwick) who have attacked GOP gubernatorial candidates for being too close to President Donald Trump on policies.

(See coverage of this issue here)

“The Rhode Island Democratic Party has no credibility when it comes [to] attacking Rhode Island Republicans about Trump when the members of their own leadership have sounded a lot like Trump. They should either come up with a new talking point or find some new leaders.”

Funding for our reporting relies entirely on the generosity of readers like you. Our independence allows us to write stories that hold RI state and local government officials accountable. All of our stories are free and available to everyone. But your support is essential to keeping Steve and Will on the beat, covering the costs of reporting many stories in a single day. If you are able to, please support Uprise RI. Every contribution, big or small is so valuable to us. You provide the motivation and financial support to keep doing what we do. Thank you.

The RIADCTC (Rhode Island Association of Democratic City and Town Chairs) seems to want new leaders. The group passed a motion Tuesday evening calling for the resignation of Joseph DeLorenzo from his position as the 2nd Vice Chair of the Rhode Island Democratic Party. 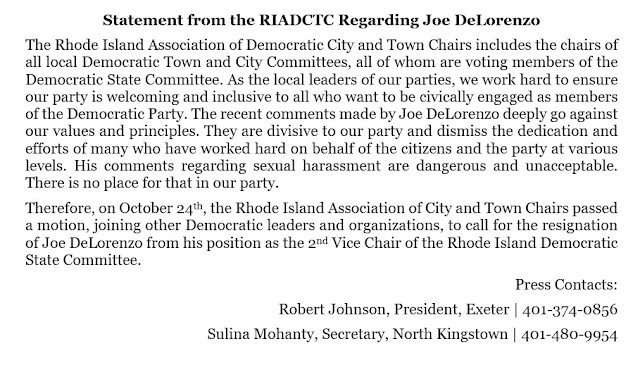 What does Rhode Island and Providence Plantations have to do with slavery? – Everything

This November 3rd, as we consider whether or not to remove ‘plantation’ from our state’s official name, let’s remember that...

“I believe that our lives are shaped by the women who are in them. Whether that’s the single parent, the...

“We demand that the Non-Violence Institute be given immediate funding to use their Street Outreach Worker program as a proactive...

“We have to stand up as a community,” said Lock Arms for Peace founder Diana Garlington. “We’re not just burying...

“Why can’t we take the street? We’re protesting. It’s our right,” asked the woman on the megaphone, prompting the protesters...

“Rhode Island’s decision to recriminalize indoor prostitution a decade ago was an unfortunate one,” said ACLU of Rhode Island executive...