“Our project, the 1000 paper crane project, is an art piece celebrating solidarity and community. In Japanese lore, the folder of one thousand Origami cranes was granted a wish by the gods,” wrote Christne Peterson who co-organized the event. “We cannot wish racism away, but we can set a goal to end it. Each crane was folded by a member of the AAPI community or one of our allies. Each was folded with love. We now have over 1000 paper cranes.” 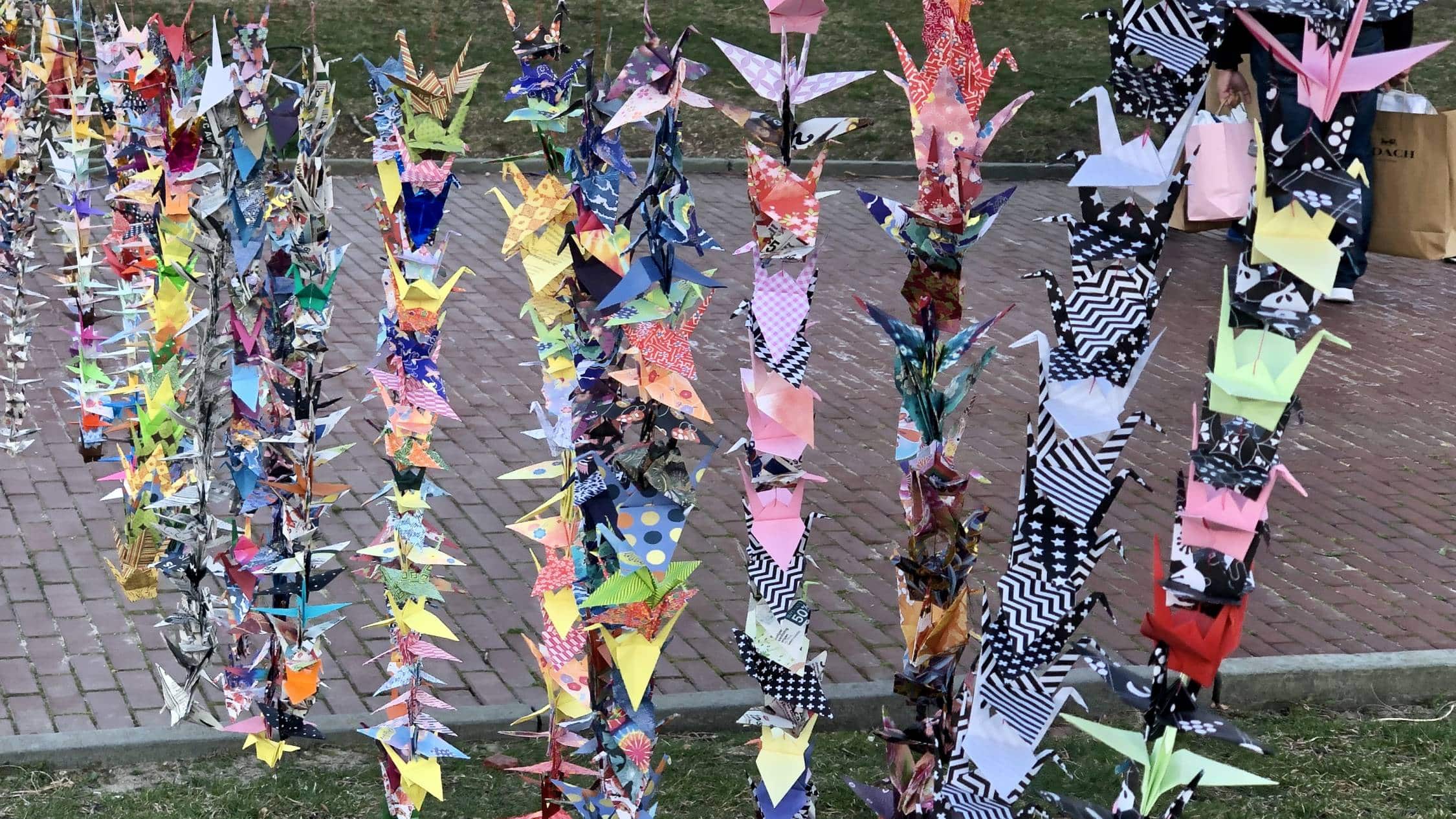 Published on April 4, 2021
By Steve Ahlquist

“I have organized, with my friend and roommate Frannie Ngo an Asian American and Pacific Islander visibility rally and vigil,” said Christine Peterson, a second generation Korean American. “This is to be a somber, thoughtful occasion, a time of reflection and community.” Peterson was moved to hold the vigil in response the horrific events in Atlanta on March 16, in which eight people, including six Asian women, were murdered. “We were suddenly called to do something because we noticed protests everywhere else and there was nothing going on here. Ours is not so much a protest – it’s more of a show of hope and a vigil to remember the ones that were taken by egregious hate.

“In the last year a lot of people, in ignorance, are blaming the virus and the pandemic on the Chinese. I went to local businesses and was told that there was no problem (with anti-Asian hate) here in Rhode Island and by doing this I risk bringing it here,” continued Peterson, “and it was very disheartening because it is here, and it is everywhere.”

Upon organizing this event, Peterson was met with overwhelming support and warmth, but was also met with unwillingness and hostility.

“A white woman accused me of not being Asian enough or aware enough to hold this event and that I am ‘just a 2nd generation Asian woman who had nothing to do with spa workers being murdered yet you want to use your privilege to whitewash them in their deaths’ and that I am ‘insisting to represent a people you know nothing about.'” said Peterson to UpriseRI in correspondence preceding the event. “I was hurt and invalidated, unseen and erased all in one exchange.”

However, “as a whole the community has been loving, with people from the LGBTQIA community, LatinX community, and African American community reaching out to show their solidarity.

“Our project, the 1000 paper crane project, is an art piece celebrating solidarity and community. In Japanese lore, the folder of one thousand Origami cranes was granted a wish by the gods,” wrote Peterson. “We cannot wish racism away, but we can set a goal to end it. Each crane was folded by a member of the AAPI community or one of our allies. Each was folded with love. We now have over 1000 paper cranes.”

The first speaker at the rally was Portsmouth Town Council Vice President Linda Ujifusa, who, with the recent departure of Cranston Mayor Alan Fung, is the highest ranking Asian American in elected office in Rhode Island. Ujifusa is also co-chair of the Democratic Women’s Caucus and co-chair of the Rhode Island Health Care Access and Affordability Partnership advocating single-payer, Medicare for All (which got enthusiastic cheers from the nearly 150 people in attendance.) At the vigil, Ujifusa was speaking as herself, a third-generation Japanese American.

“Racism against Asians is not new,” noted Councilmember Ujifusa. “In 1942 President Franklin Delano Roosevelt signed executive order 966 – incarcerating about 120,000 people of Japanese ancestry – including my mother’s family.” Her family lost their farm, despite her family being both legal immigrants and first born American. Her father lost his admission to West Point (he volunteered a day after the attacks on Pearl Harbor) because he was Japanese American.

“It was decades before my nisei parents could talk to their post-war children about the camps,” said Councilmember Ujifusa. “My family, like most other Japanese Americans simply covered their sense of loss and betrayal with the Japanese phrase shikata ga nai, ‘it cannot be helped’ or, to use the vernacular, ‘Just suck it up.”

“What has changed today? Sadly, there’s still racism and discrimination but I am at a public vigil commemorating the Georgia victims with a group of people of all nationalities and backgrounds who do not believe shikata ga nai. You believe you can, and must work against racism, even when led by a former President of the United States.”

“I was raised in Chinatown, New York City,” said Frannie Ngo, who co-organized the event. “All my life I have kept my head down to avoid confrontations, to avoid making a scene. I am hesitant with my words and actions at work, and around my friends. I never wanted to appear sensitive (like) I cannot take a joke, but none of this is funny. When attacks on Asians started to rise, I worried. Attacks have been happening everywhere. My home city is no exception…”

“I am tired of keeping my head down. I want to bring my head up and tell people about the injustices that Asian American people face every day. True evil took place in Atlanta. The increased attacks on Asian people is sickening. The hostility of people who believe we caused the pandemic is ignorance…”

“When an administrator tells me to stick to the literature to stop getting myself into trouble and keep my head down after having a class discussion about a hate crime that killed six of my people, I will tell her that I am an educator, and not robot,” said Pham.

Rhode Island State Treasurer Seth Magaziner shared a few words, noting that as the administrator of the state’s Crime Victim’s Compensation Fund, he has had 122 Rhode Islanders who self-identify as Asians who have received a claim through the program.

Rhode Island Secretary of State Nellie Gorbea also addressed the crowd. She encourged those attending to channel their outrage into action, and consider running for elected office.

Organizer Christine Peterson closed the vidil with a poem and a moment of silence. The cranes created for the event will be on display at AS220 sometime in May.

Will James provided the livestream:

“I hope that this outcome – and the monetary cost associated with it – dissuades other municipalities from enacting measures like this one, which are cruel, short-sighted, and based on...

“When I asked the boy who threatened my life with a knife for an explanation of his actions, for a reason, so that I might think more clearly about the...