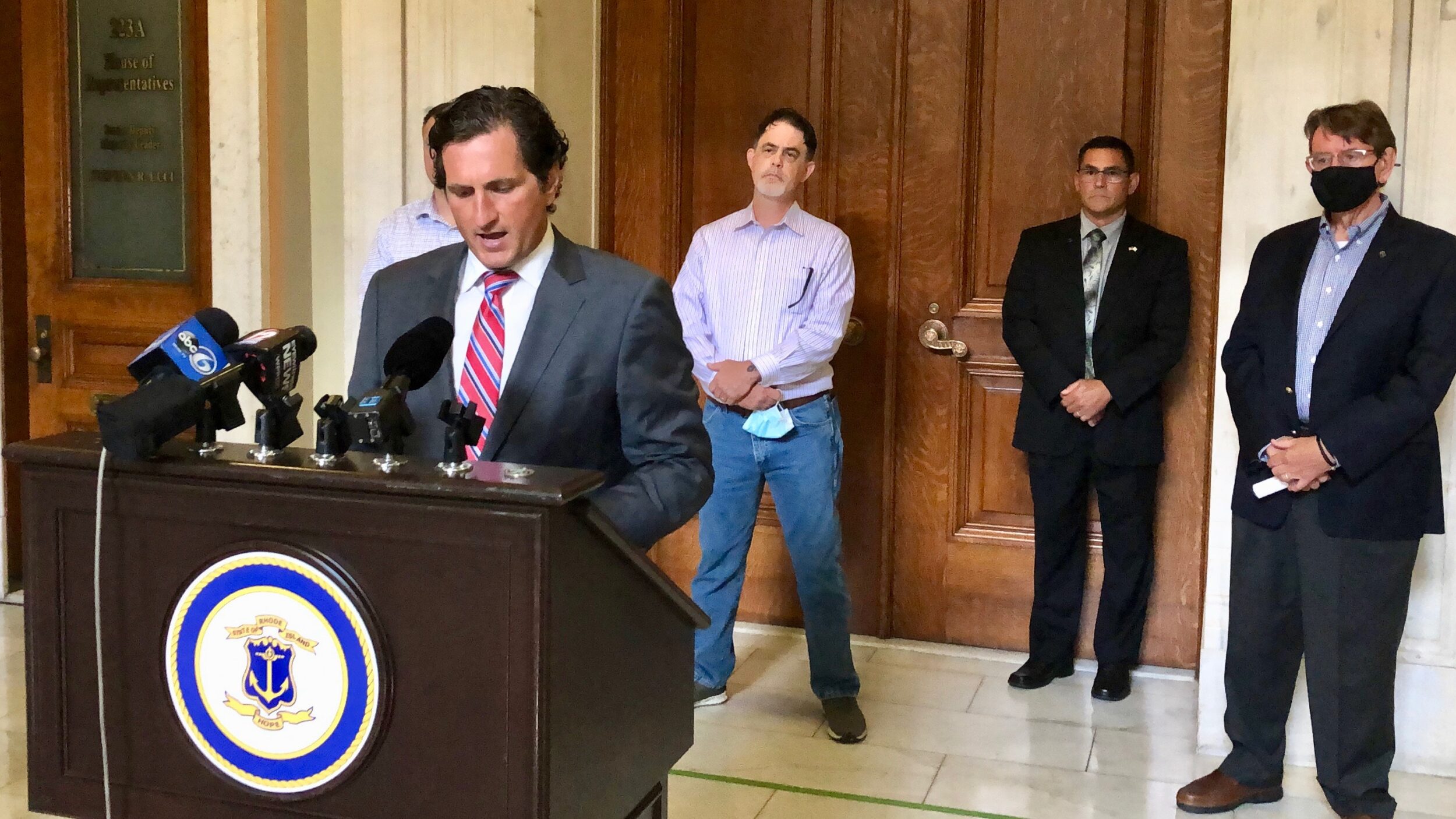 “Just two days ago, in our capacity as JCLS secretary, we were served a public records demand by Mr. Britt’s criminal defense attorney – Former US Attorney Robert Corrente – for all JCLS documents relating to the receipt and expenditure certain federal funds. Federal Funds!“

The House Republican caucus held a press conference today to announce a legal quandry that presented itself when an attorney for Jeff Britt, House Speaker Nicholas Mattiello‘s former campaign operative, requested documents about the use of federal funds by the Joint Committee on Legislative Services (JCLS), which Speaker Mattiello controls unilaterally. That control of the JCLS is being challenged by a lawsuit from House Republicans. The JCLS is the spending arm of the Rhode Island General Assembly, to the tune of almost $1 million a week.

“On May 20, 2020, we requested that Attorney General Neronha protect us from Speaker Mattiello’s unlawful control of the Joint Committee on Legislative Services – and its budget of $46 Million dollars of taxpayer money.

“As many of you know, the JCLS is the spending arm of the General Assembly – which by law must be controlled by a bipartisan group of legislators. Yet, the JCLS has not met in over ten years. TEN Years! Rather, it has been taken over by Speaker Mattiello – who has declared himself a one-man majority of this 5-member committee.

“Because of this lawlessness, and an illegal audit of the Convention Center ordered by Speaker Mattiello, in January, 2020 we filed a lawsuit against Speaker Mattiello to stop his unlawful control of the JCLS and this taxpayer money.

“That lawsuit continues. At our May 20, 2020 meeting, we asked that the Attorney General follow RIGL 42-9-6 – and hire an attorney to protect us from potential civil and criminal liability due to Speaker Mattiello’s unlawful control of a rogue JCLS.

“The JCLS is the epicenter in no fewer than three grand jury investigations, or criminal prosecutions.

“Jeff Britt was Speaker’s Mattiello’s 2016 campaign operative — who is currently facing money laundering charges due to his alleged actions on behalf of Speaker Mattiello’s campaign. Just two days ago, in our capacity as JCLS secretary, we were served a public records demand by Mr. Britt’s criminal defense attorney – Former US Attorney Robert Corrente – for all JCLS documents relating to the receipt and expenditure certain federal funds. Federal Funds!

“Now, as JCLS Secretary – we’re responsible for the care custody and control of the all JCLS documents – but we don’t have control of any documents. The Speaker controls all documents, as he has illegally taken control of the JCLS. Don’t forget, the Attorney General has recently pursued public records complaints against the JCLS. So, now we’re sucked into the Jeff Britt trial – which concerns the unlawful actions during the Mattiello campaign, which Attorney General Neronha is prosecuting, which now apparently has something to do with the JCLS, which Mattiello has unlawfully taken over. Are you starting to see the wicked web? Someone, please tell me: how do we even proceed– we’re lawfully required to respond to Attorney Corrente’s document request.

“We can’t get the documents from Speaker Mattiello because of his conflict – he will be a witness in the Jeff Britt trial – and Attorney Corrente’s document demand is undoubtedly aimed at digging into Mattiello’s unlawful JCLS activities as they relate to Jeff Britt. We could never certify as complete a response to Attorney Corrente that was provided to me by Speaker Mattiello. If we had a functioning JCLS, we would be able to meet and deal with this. But my follow members of the JCLS won’t meet and have taken the position in our Superior Court action that Mattiello can lawfully control the whole thing – that he alone can act as the majority of this five-member committee.  Even President Ruggiero has taken that position – despite proclaiming for years about the need to clean up JCLS. Just words. Silence when it counts.

“This Britt Trial debacle is the exact type of legal quandary we asked Attorney General Neronha to protect us from over a month ago –but we cannot get the Attorney General to uphold his statutory mandate to hire counsel to advise us on how to navigate this mess — this catch-22 –how to protect ourselves from Mattiello’s illegal conduct, and how to protect the taxpayers.

“The multiple levels of government failure in the JCLS saga is striking: The JCLS members have failed their duty by letting Mattiello commandeer the JCLS and use it as is political fiefdom. The Raimondo Administration has approved all expenses despite her administration’s duty to ensure all JCLS expenditures are lawful. How can $46M in expenditures per year be lawful when the committee hasn’t met in 10 years?

“Treasurer Magaziner has just blindly written the checks. And now, Attorney General Neronha will not obtain  legal advice for us, even though he is legally obligated to. This keeps snowballing. It keeps getting worse.  And we’re out on a limb all alone trying to do the right thing – trying to have everyone start following the law – but now we’re exposed to potential liability simply because of our membership in this rogue JCLS organization.

“Given what is going on, we have no choice but to go public, and demand, SIX WEEKS after we first asked for it, that Attorney General Neronha follow the law and hire an attorney to advise us on how to navigate this wicked web – how to protect taxpayers and ourselves and from the JCLS –and how to get these necessary documents from JCLS, which we’re legally obligated to obtain, so that we are able to respond to Attorney Corrente’s lawful demand on behalf of his client who is entitled to due process and a fair trial.”

In a statement Larry Berman, spokesman for Speaker Mattiello, writes:

“Leader Filippi’s press conference today was purely political theater. If he had taken a few moments to review the General Assembly website, he would have seen the proper procedures for anyone seeking public records pursuant to the Access to Public Records Act. All records requests properly filed with JCLS are answered in a timely manner. Many members of the media and the public follow these procedures without any confusion. It is ironic that Leader Filippi is complaining publicly when he never told anyone in JCLS that he received this request for information.

“JCLS has no records pertaining to this matter. The Fiscal Year 2020 budget appropriated $500,000 from general revenues for the statewide Complete Count Committee, created by the Governor’s executive order (18-09). The Department of Administration is responsible for this funding and any federal funds that may have been used to supplement it.”

CounterPower PVD: “Knock it Off!” – Safety, Housing and Economic Relief for All

"If we can garner the hope and energy to organize, collaborate and build we can create a city and a...

It was a powerful image: A hearse leading a procession of two dozen cars away from a cemetery, metaphorically moving...

Illuminate our town with peace and love: A silent illuminated vigil in Barrington

“We’re gathered here today to show the world, Rhode Island, Barrington, our country, that hate will not win, that love...

This week at the Rhode Island State House

Here's all the video from the General Assembly last week, and a preview of what's (tentatively) on the agenda this...