What the Law Enforcement Officer’s Bill of Rights (LEOBoR) does is “it prevents officers from being held accountable,” said Harrison Tuttle, Executive Director of the Black Lives Matter Rhode Island PAC at a rally outside the Providence Public Safety Complex Friday evening. “What’s going in Providence right now is that we’re seeing our youth being pepper sprayed… our youth being punched and spit on…”

The rally was held in response to Providence Police body worn camera footage released on Wednesday that documented the arrests of three juveniles after a high speed chase through several Rhode Island cities and towns. In the videos officers can be seen violently assaulting the children, with one officer apparently spitting on one of the juveniles in rage.

Tuttle also asked why the state legislature, after the summer of protest last year and the murder of George Floyd, hasn’t passed any kind of police accountability act for police officers.

Tuttle acknowledged that the alleged actions of the juveniles leading to their arrest were not okay. “But it is not okay, once they are arrested, to brutalize and kick and spit on those children.”

“What we have here is an institutional problem,” said Jim Vincent, President of the Providence Branch of the NAACP. “And this intuitional problem, the Law Enforcement Officer’s Bill of Rights, needs to be abolished. Not reformed, abolished.

“We have 35 states in the United States that don’t have LEOBoR… The only New England state that has LEOBoR is Rhode Island,” noted Vincent.

“When I was on the Senate Commission about LEOBoR, I heard that Rhode Island is the toughest state to discipline an officer in the country! I couldn’t believe it… I was outraged… That’s why I’m here, because this is really easy.”

“The people keeping LEOBoR alive in the state are the police departments, their lobbying forces, and those who seek to oppress the voices of the people who are here and have been calling, since last summer, to hold our police accountable, to defund our police and rethink how we keep our communities, specifically Black and brown young people, safe,” said State Senator Tiara Mack (Democrat, District 6, Providence), sponsor of the Senate Bill to repeal LEOBoR. There is no House version of the bill. “We currently are yielding to the people who hold the power – who are oppressing our young people, our communities – who are harassing them – who are terrorizing our streets, who a criminalizing our people, purely because they exist –

“And they are the stakeholders on whether or not we are able to hold these systems accountable?” asked Senator Mack. “This past session we did not have enough brave people standing with the overwhelming majority of Rhode Islanders who know that in order to hold our police accountable, and to build the public trust in our policing system as it currently exists… to remove the barriers for accountability.”

There were only 15 signatures on Mack’s bill to repeal LEOBoR on the Senate side, and no sponsors of similar legislation in the House. (Representative Anastasia Williams (Democrat, District 9, Providence) has pushed forward a bill that would make minor reforms to LEOBoR.)

“That means that by next session, we have to have a commitment – we have to demand – that there is a bill – that passes the Rhode Island General Assembly – that repeals LEOBoR.”

“Systems designed to destroy people’s spirits will eventually destroy our society,” said gubernatorial candidate Dr Luis Daniel Muñoz. “Every time a youth is abused – every time a human being is abused it is no longer a deterrent. It is a flame that is going to continue to ignite a revolution. LEOBoR is the levy. We need to break it.”

Dr Muñoz reflected on growing up in Central Falls in the early 2000s, Muñoz recalled community policing efforts. Officer who knew him would not harass him, but officers that didn’t know him did. “Needing a connection with a specific police officer to not have fear to walk the streets is not progress.”

“But I give them credit, because it was better than what we were seeing, because we would cross over to Cumberland, where the current Chief of Staff to the Governor used to be Chief of Police, and Central Falls kids were getting their heads beat in. Central Falls kids were being pushed on the ground with their teeth knocked out. Friends of mine. I will never forget that.”

“Here in Providence we’ve seen some pretty terrible examples of violence recently,” said Providence mayoral candidate Gonzalo Cuervo. “Anybody who engages in violence needs to be held accountable and they need to be held up to the law…”

And that accountability extends to police officers who “engage in physical violence that is clearly excessive and unnecessary. And I think we saw that with the recent release of these video clips.”

Curvo recalled the videos of mass shooters across the country being gently taken into custody by arresting officers. “How are those police officers able to exhibit so much restraint and professionalism under so much duress?”

“The Law Enforcement Officer’s Bill of Rights has been created as a shield, and has been used as a shield against accountability.”

“I watched the videos over and over again and I’m still in shock,” said Providence City Councilmember Nirva LaFortune (Ward 3) who is also running for Mayor of Providence. “It’s hard to articulate why someone would behave in that manner and treat another human being in that way. The reality is, whether you have LEOBoR or not, there are certain behaviors that are just unacceptable…

“To spit on someone? I have no words.”

“We expect them, as sworn officers, to conduct themselves in a professional manner – to respect the people they are serving,” said Councilmember LaFortune. “Whether the person commits a crime or not you still have to respect the person’s dignity.”

LEOBoR is a problem, said Councilmember LaFortune, “But this is beyond LEOBoR. This is a lack of respect for another human being.

“People of marginalized identities – Black and brown folks – their encounters, these harmful encounters, have been happening for years. For centuries. This is not okay.

“I’m upset to think that a City I love so much could have officers working for them who would do such violence to young men,” said Gerard Catala, who ran as an independent for Providence City Council in Ward nine in 2018. Catala is also a cousin to one of the boys arrested on King Street.

Catala noted that on King Street, one of the juveniles was Black, one was Latino, and one was white. “All three of them were being arrested at the same time… The Latino brother on the left and the Black brother who was on the far right – each had four or more officers on them and they were being beat, kicked and spit on.

“But the white brother who was in the middle had only two officers handcuffing him – very gently. Very easily. That optic is very powerful.” 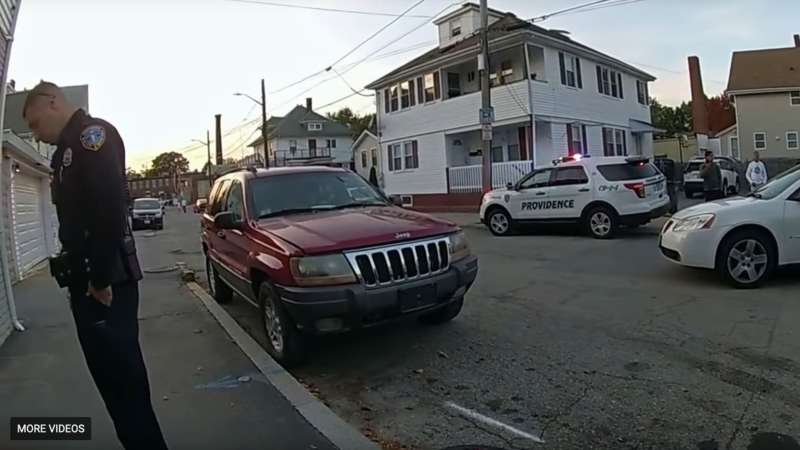