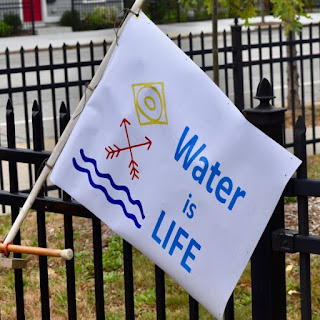 The Tribal Council of the Narragansett Indian Tribe (NIT) has filed a motion to intervene in the Energy Facilities Siting Board (EFSB) hearings on Invenergy’s proposed $1 billion fracked gas and diesel oil burning power plant aimed at the forests of northwestern Rhode Island. A majority of the current Tribal Council members have determined to seek intervenor status.

The Tribal Council maintains that the deal to provide water to cool the proposed power plant’s turbines, reached between Tribal Leadership and Invenergy, is invalid.

The Tribal Council maintains that they are not adequately represented by existing parties. Noting that local (Burrillville), environmental (Conservation Law Foundation) and labor interests (Building Trades) are represented in the hearings, the motion declares that none “of the current intervenors is capable of representing the interests of the Tribal Council in this docket.”

Recently the EFSB granted intervenor status to the Town of Charlestown. Like Charlestown, the Tribal Council has not been able to evaluate the agreement reached between Tribal Leadership and Invenergy.

The “text of this supplemental plan makes it clear that Invenergy plans to draw water from the Lower Wood River Aquifer, ostensibly using existing tribal well infrastructure… The outcome of the EFSB’s decision, should it precipitate or allow for the sale of any of the Tribe’s water, even on a contingent basis, could potentially bind Narragansett Tribal Members and the Tribal Council charged with representing them, for generations to come.”

The Tribal Council has strong reasons for not believing their interests are represented by the Town of Charlestown, even putting aside “any of the historic and sometimes recurring tensions that arise between the municipality and the Tribe.”

Attorney Shannah Kurland, representing the Tribal Council, writes eloquently on behalf of the tribe, as in this passage:

“‘Water is life’ has become a familiar maxim to Native and non-Native peoples throughout the Americas in recent times, much of it due to concerns regarding the impact of contested development projects on water supply in Indian Country. Here, the actual site proposed for the Clear River Energy Center in Burrillville is roughly fifty miles from Narragansett tribal lands, a distance considered ‘far’ by Rhode Island standards. Yet the proposed purchase by Invenergy of water from tribal lands brings the issue as close to home physically, economically, and culturally as possible.”

Related Topics:Public Utilities
Up Next

Has the Governor flipped on the Burrillville Power Plant?

In response to Fall River water deal with Invenergy, CLF ups the ante