Housing advocates name and shame the top ten evictors in Rhode Island, and their lawyers

Is the Law Enforcement Officer's Bill of Rights about accountability?

Germaine Bruce was helping a friend start her car. Then the police arrived... 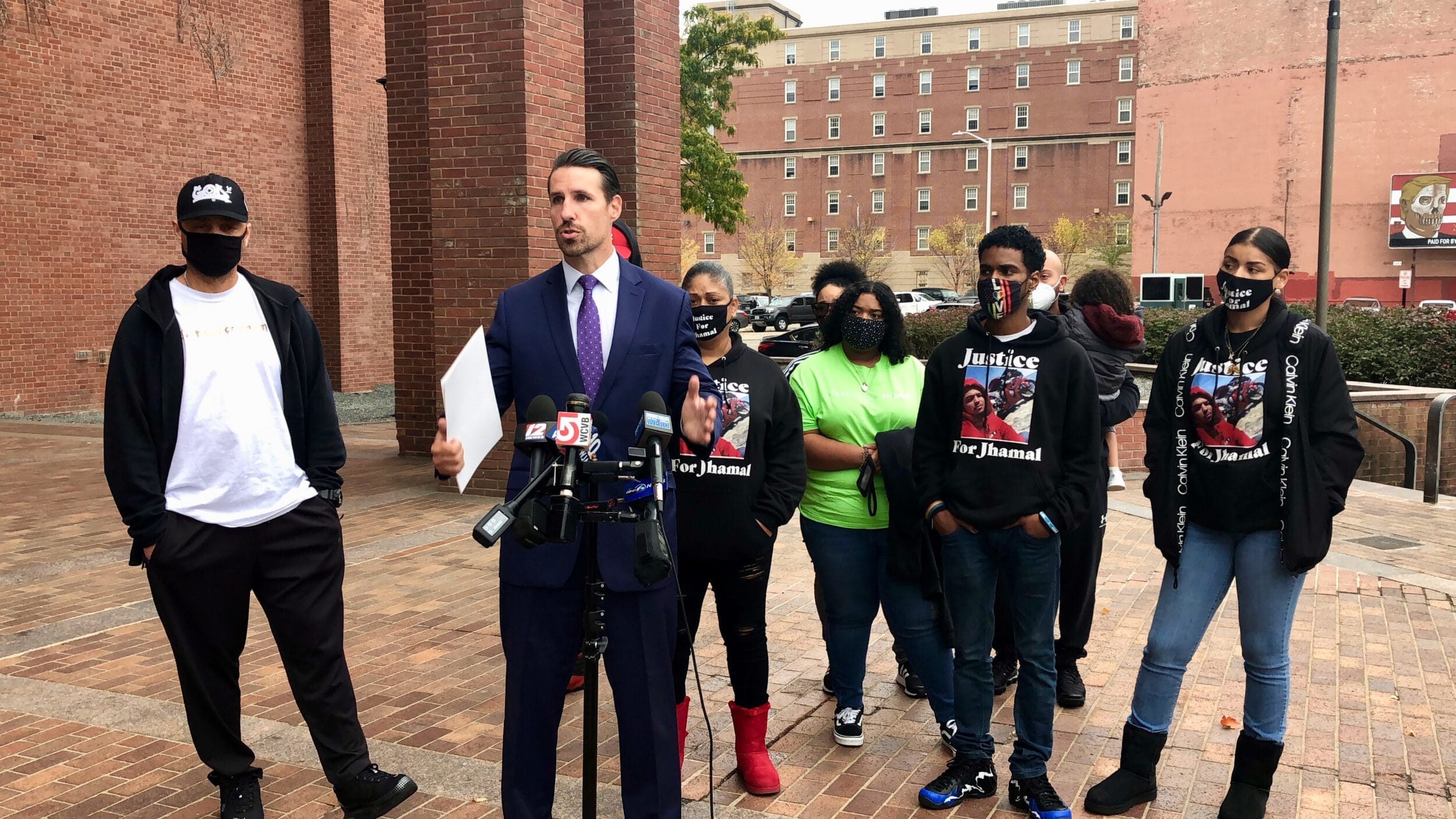 “There are eyewitnesses. You heard one of them on the body cam. He saw exactly what happened… He didn’t have the video in frame [but] he saw it and that’s evidence as well. It doesn’t have to be caught on video for it to actually have happened.”

Jhamal Gonsalves “is still critical condition, still in a coma, [and] has a very long way to go,” said his mother, Tia Tribble, at a press conference held by the family outside the Court House on Dorrance Street in Providence Monday afternoon. Gonsalves, 24, was riding his moped when a police cruiser impacted him, sending him to the hospital eight days ago. Since then, there have been protests and prayers and questions raised about the actions of the Providence Police that led to the tragedy and called into question the professionalism of the officers involved in response.

Here’s most of the press conference. I missed the first few minutes but caught it courtesy of Bill Bartholomew’s live stream here.

Today Providence city officials released police officer body cam footage, none of which shows exactly how Gonsalves was injured, but does show officers tugging the arm of his unresponsive body, administering Narcan, and discussing whether or not to remove Gonsalves helmet before EMTs were on the scene.

“The footage was upsetting and extremely difficult for the family,” said Jude Kerrison of Karns & Kerrison, the lawyer retained by the family. “For anyone to see a loved one in that condition would be traumatic.”

The family remains confident that the questions raised by the footage will be answered. The family asks for patience and restraint from the public.

“The family has consistently asked that any public demonstrating be peaceful,” said Kerrison. “Jhamal’s father Mark has asked that any demonstrations done during the day be concluded before dark. We again, asked the people to continue to demonstrate their support, and raise their voice, but we also ask that everyone remain peaceful.”

Three protests have been held in the wake of Gonsalves’ injuries, arrests and altercations with the police occurred at two of them. Throughout the family has called for peace and disavowed violent protest in their son’s name.

Attorney Kerrison made note of the fact that Officer Kyle Endres, who was driving the vehicle that impacted Gonsalves’ moped, was on his radio shortly before the incident. “We would be interested in knowing what was said at that moment.”

The fact that there was a discussion about removing Gonsalves helmet, while he lay unresponsive on the street, was “concerning” said Kerrison.

Even without a video showing the moment of impact, the family is confident that they can know what happened. “There are eyewitnesses. You heard one of them on the body cam. He saw exactly what happened… He didn’t have the video in frame [but] he saw it and that’s evidence as well. It doesn’t have to be caught on video for it to actually have happened.”

When Mark Gonsalves spoke about the police administering Narcan to his unresponsive son, he struggled to find the words.

“I work with people in the community with mental illness and addiction and to see an officer pull out Narcan which he’s prepared with, and then saying he doesn’t know how to use it – I was a little disappointed with some of the professionalism, some of the empathy involved,” said Mark Gonsalves. “To assume, because maybe – I’m not saying it’s out of – as far as racially – I don’t know this officer’s or any of the officer’s background so I’m not accusing race being a part, but to just assume – It’s kind of questionable. Why would you assume after you see him riding fine, and then, all of a sudden, because he’s on the ground, talking about Narcan… it upset me…”

Housing advocates name and shame the top ten evictors in Rhode Island, and their lawyers

"Governor Raimondo should stop being a coward and use her executive power to protect renters from being evicted in the...

"It's shocking, but one in four households lack adequate food," said Andrew Schiff, CEO of the Rhode Island Food Bank....

"Locally, we lost a friend and loved one who was an organizer in Providence for several years, Tatiana Jones. Tatiana...

Coalition rallies for taxes on rich to fund essential services

"While it is not well known, in 2006 the State of Rhode Island cut taxes for the wealthiest Rhode Island...

“It is time for the state to grapple with, rather than find excuses for, the presence of racial profiling on...

UpriseRI is proud to join the call for a more open and more democratic government. This call is not in...